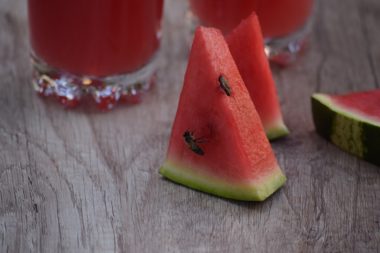 Use these easy ways to keep wasps and bees away from picnic food at the park or at home. They won’t crawl into soda cans, and guests will be far less likely to end up stung –

Wasps are often mistaken for bees since they both have black and yellow stripes, and they can be a huge problem during summer and fall picnics. They land on food and crawl into cans of sweet beverages, and people are often stung. It’s best to use effective ways to keep wasps and bees away from picnic food in the first place. Flies and gnats are bad enough, but at least they don’t sting. Use these methods and you’ll be able to enjoy food and canned drinks instead of worrying about stinging insects of any kind. They will take the fun out of picnicking, but they don’t have to ruin your good time or send anyone to the ER.

Don’t Use Yellow and White Picnic Table Coverings or Accessories

Yellow and white picnic table covers, plates, cups and other outdoor dining accessories are bright, cheerful and attractive. A vase of fresh white daisies with sunny yellow centers would make a lovely finishing touch on picnic tables, but the wasps and bees will agree. Imagine bringing a lemon meringue pie and bright yellow soda to the picnic. They’re naturally drawn to yellow and white. It would become a bee and wasp fest, especially if guests also wore white and yellow. Just imagine the mayhem that would ensue! It could turn into a scene from a horror movie, but it doesn’t have to.

When planning ways to keep wasps and bees away from picnic food, don’t buy or use yellow and white table coverings and accessories. Buy red picnic gear instead. According to experts, they apparently can’t see it that color. In areas where wasps and bees are a huge problem, wearing red is also advisable. Make it your family color for outdoor summer and fall activities. In any case, wearing red is preferable to ending up red because of wasp and bee stings.

Choosing picnic table coverings and accessories of the right color(s) isn’t the complete answer. When seeking ways to keep wasps and bees away from picnic food, mesh covers are phenomenal tools. Wasps and bees will land on everything from the main course to desserts. They’ll keep the food safe from wasps, bees, gnats, flies and other crawling and flying insects. They’re well-made and have no gaps around the bottom. They’re also great because they’re clear. People can view the contents before removal, and if the problem is bad enough, they can be placed over plates while eating. They come in three sizes, and they fold flat for storage and transport purposes. I wouldn’t picnic near wasps and bees without them.

Ever Been Stung by a Wasp or Bee on or in the Mouth? 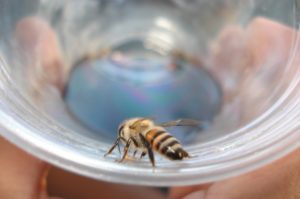 The food isn’t the only consumable to worry about when battling bees and wasps at a picnic. When looking for ways to keep wasps and bees away from picnic food, don’t forget about protecting open canned beverages. My husband was stung on the lip by a wasp that he didn’t see in a can. Of course the pain was excruciating, and his lip immediately swelled.

Someone allergic to stings could end up with a life-threatening anaphylactic reaction. He didn’t, but Jokari Snap and Sip Can Caps could have prevented the sting that ruined the rest of his day. No one can continually watch their drink, but they won’t have to with these tight-fitting flip-top can caps. Even if they’re left open, wasps and bees can’t get in. Since the caps come in various colors, drinks won’t become mixed up with others. They serve triple-purpose since they also prevent spills.

Keep the Trash Cans as Far Away as Possible –

Whether hosting a summer or fall picnic at your home or at a park, stay as far away from the trashcans as possible. Wasps can become aggressive when it comes to food, and bees search out sweets. They don’t care if their nourishment comes from flower pollen or Aunt Ethel’s partial can of soda pop. You’ll see them flying in and out of trashcans and crawling all over trash, especially at public parks where garbage is left to spillover and where bags and lids are open.

Also, consider bagging your own trash instead of trying to stuff it into public wasp and bee-laden cans. Keep the top secure instead of wide open, and either haul it home in your trunk for disposal, or dispose of it just before leaving. However, keep in mind that wasps and bees can squeeze into extremely small spaces. Leave the bag open just a little, and you might take along a stowaway. 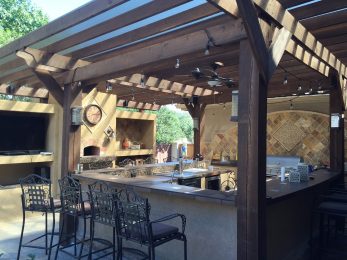 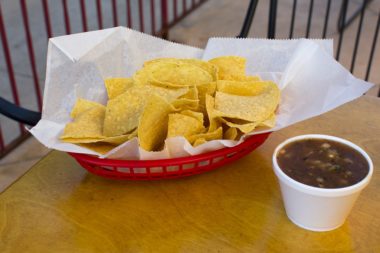 The Benefits of Using Food Baskets Instead of Plates 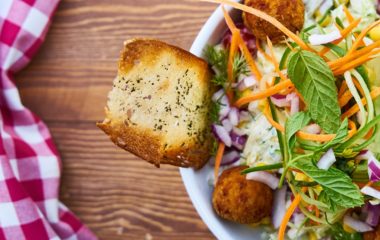