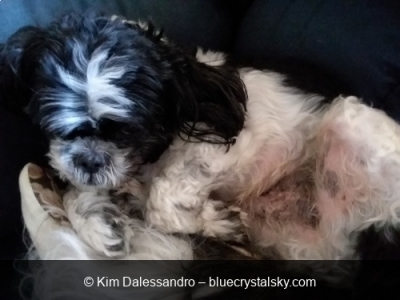 Wondering why a dog’s stomach would turn black? People panic when they notice these types of changes in skin color, and for very good reason. Cancer immediately comes to mind, but it’s best not to try and diagnose yourself or your pets online. You’ll start imagining worst case scenarios and worry needlessly.

On the other hand, you might ignore something in need of medical attention. When in doubt, it’s best to seek the advice of a veterinarian, but it’s probably just a normal and/or an easily treatable change known as primary or secondary hyperpigmentation.

What the Vet Said about My Dog’s Black Skin Splotches 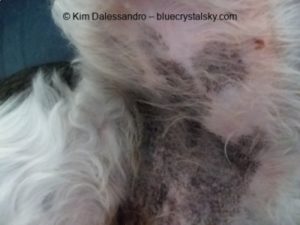 I took the attached photos of black spots on a dog’s stomach. Thankfully my dog didn’t mind having his nap disturbed and pictures taken of his nether region. I still didn’t know why a dog’s skin would turn black. His tummy used to be light pink and didn’t have black splotches, but after spring allergies and lots of itching and licking a few years ago it began turning dark. The surrounding skin on his abdomen and legs turned bright pink and became itchy and irritated. The veterinarian wasn’t at all concerned with the change in color on the dog’s stomach, but she prescribed shampoo for allergens and itching.

Still wondering why a dog’s stomach would turn black? Causes of hyperpigmentation in dogs include;

Skin Changes Could Be Related to…

I also had an American Eskimo

with pure white fur and ivory skin. After spending time in the sun I noticed the sudden appearance of black splotches on the dog’s stomach, back, and sides. I wondered what would cause a dog’s stomach to turn black and brought it up to her vet.

He said that in her case it was caused by the sun. He also said it would never go away, and he was right. Although it didn’t cause health problems the spots never disappeared or lightened.

When wondering why my dog’s stomach is turning black consider his or her age. People develop age spots, and a dog’s skin also changes. Breeds prone to obesity are also prone to hyperpigmentation, especially dachshunds.

My shih-tzu’s stomach didn’t begin turning dark until he was around 8 years old. It happened around the same time he had allergies, but age and time in the sun may have also factored in.

Why a Dog’s Stomach Would Turn Black

Now that you know possible reasons as to why a dog’s stomach would turn black it’s important to consider any other symptoms. It’s up to you to decide if he needs to see the vet, and they should decide the proper course of treatment.

An early veterinary visit may be in order if he’s biting, licking, has lesions, redness, or if he’s ill or seems uncomfortable. Keep in mind that even if the discoloration is secondary (caused by another problem) it’s more than likely harmless and treatable. If black spots are spreading on a dog’s stomach or elsewhere on his skin it’s usually nothing to worry about. 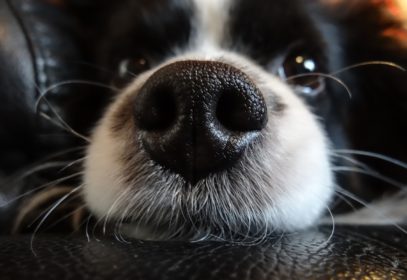 Why an Old Dog’s Nose Dries Out 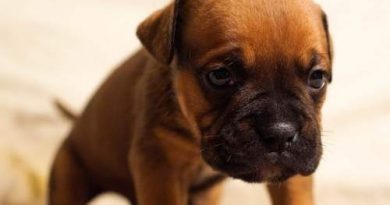 Ways to Stop Dogs from Scooting on Carpets 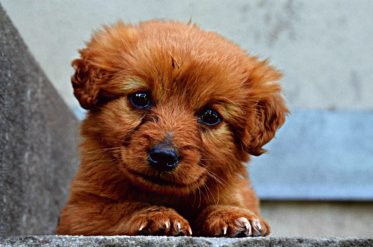 One thought on “Why a Dog’s Stomach Would Turn Black”